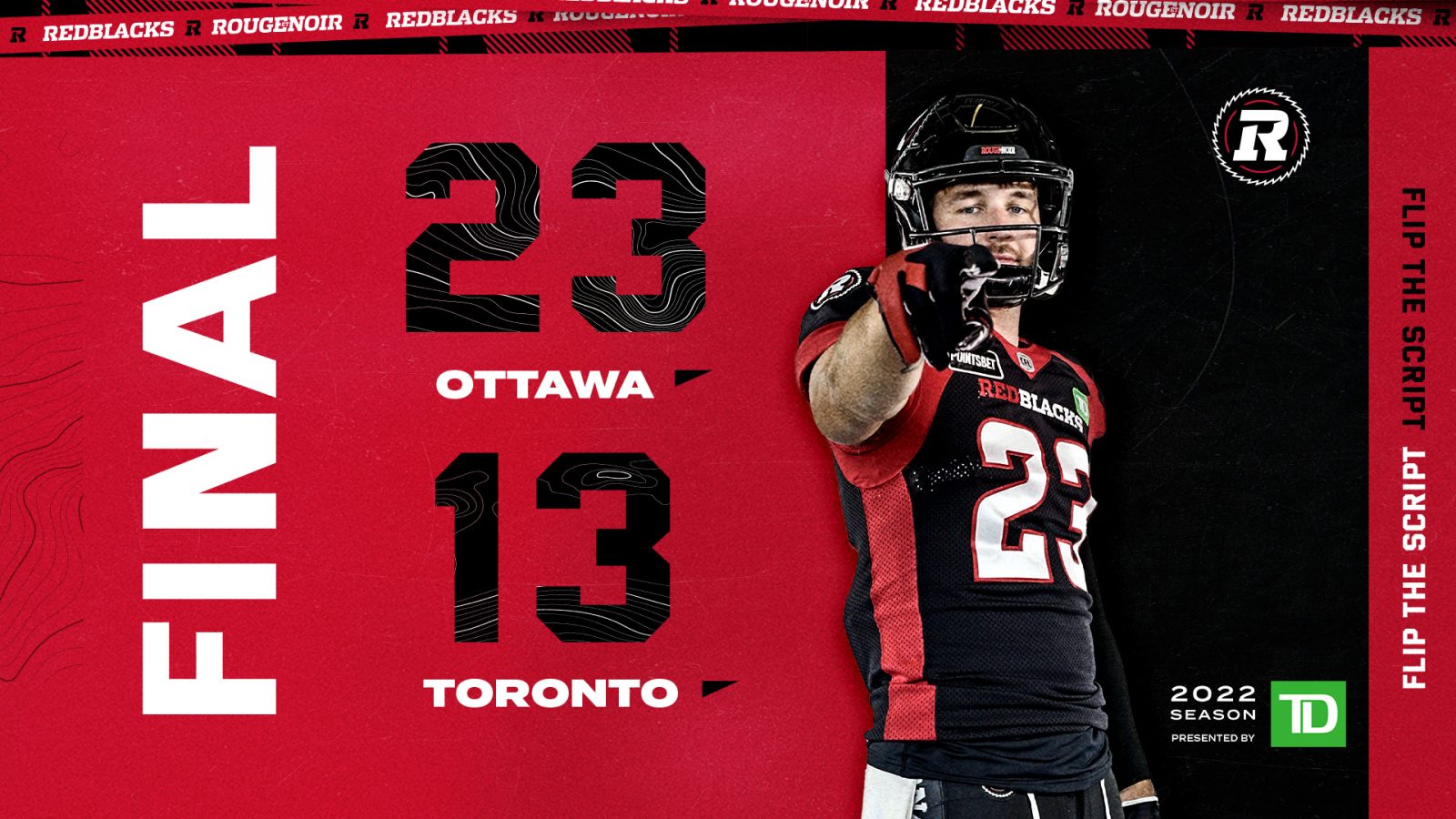 With their backs against the wall, the Ottawa REDBLACKS finally earned their first victory of the 2022 season, on the road against the Toronto Argonauts.

Caleb Evans threw for 286 yards and a pair of touchdowns to Jaelon Acklin, and Nate Behar, respectively. Acklin led the charge for Ottawa, racking up 144 yards through the air on top of his major.

The REDBLACKS struck first, after Acklin broke free for a 46-yard catch and run into Argos territory. Lewis Ward made good on a 46-yard field goal attempt, stoking Ottawa out to a 3-0 lead.

Toronto returned fire on the next possession, however, with Boris Bede knocking through a field goal from 42 yards to even the score.

After another big gain by Acklin, this time for 20 yards, runs by Jackson Bennett and Tyrie Adams put the REDBLACKS in much easier field goal range for Ward, who knocked through another from 31 yards for a 6-3 lead.

The Boatmen found the game’s first touchdown in the second quarter, despite a pair of sacks by Mauldin, and Davon Coleman, respectively. Bethel-Thompson found Brandon Banks in the endzone from 29 yards out, and an extra point made it 10-6 Argos.

Bede added another field goal with 55 seconds remaining in the half, but the REDBLACKS used the remaining seconds to respond. Evans connected with Shaq Johnson, Ryan Davis, and Behar to drive down the field. With 21 seconds to go, the quarterback rolled to his right, and found Acklin in the endzone for the touchdown. Ward was perfect on the PAT, and the REDBLACKS tied the game at 13-13 going into the second half.

With the ball in their hands to open the third quarter, some hard running by William Powell drove the REDBLACKS into Toronto territory, coupled with another catch by Acklin. The drive ended with a 21-yard Ward field goal, restoring the Ottawa lead at 16-13.

The Argos looked to rally back, but were stifled by the Ottawa defence. On an Harris run, Mauldin knocked the ball free, and Patrick Levels made the recovery for the REDBLACKS, notching a key turnover in the tight matchup.

Just past the midway point of the fourth quarter, the REDBLACKS found themselves in the redzone, and after an Argos penalty gave them a new set of downs, Evans linked up with Behar in the endzone from seven yards out. Ward converted the single, and the REDBLACKS extended their lead to ten.

Toronto tried to march down the field with less than two minutes to go, but a huge sack by Kene Onyeka set up a third and long, where the REDBLACKS forced an incompletion, and a turnover on downs.

Using the ground game, Evans and the Ottawa offence ran the clock down, and finally earned their first win of the season, by a final score of 23-13.

UP NEXT: The REDBLACKS are back at home on Friday, for a 7:30pm ET showdown with the Calgary Stampeders.