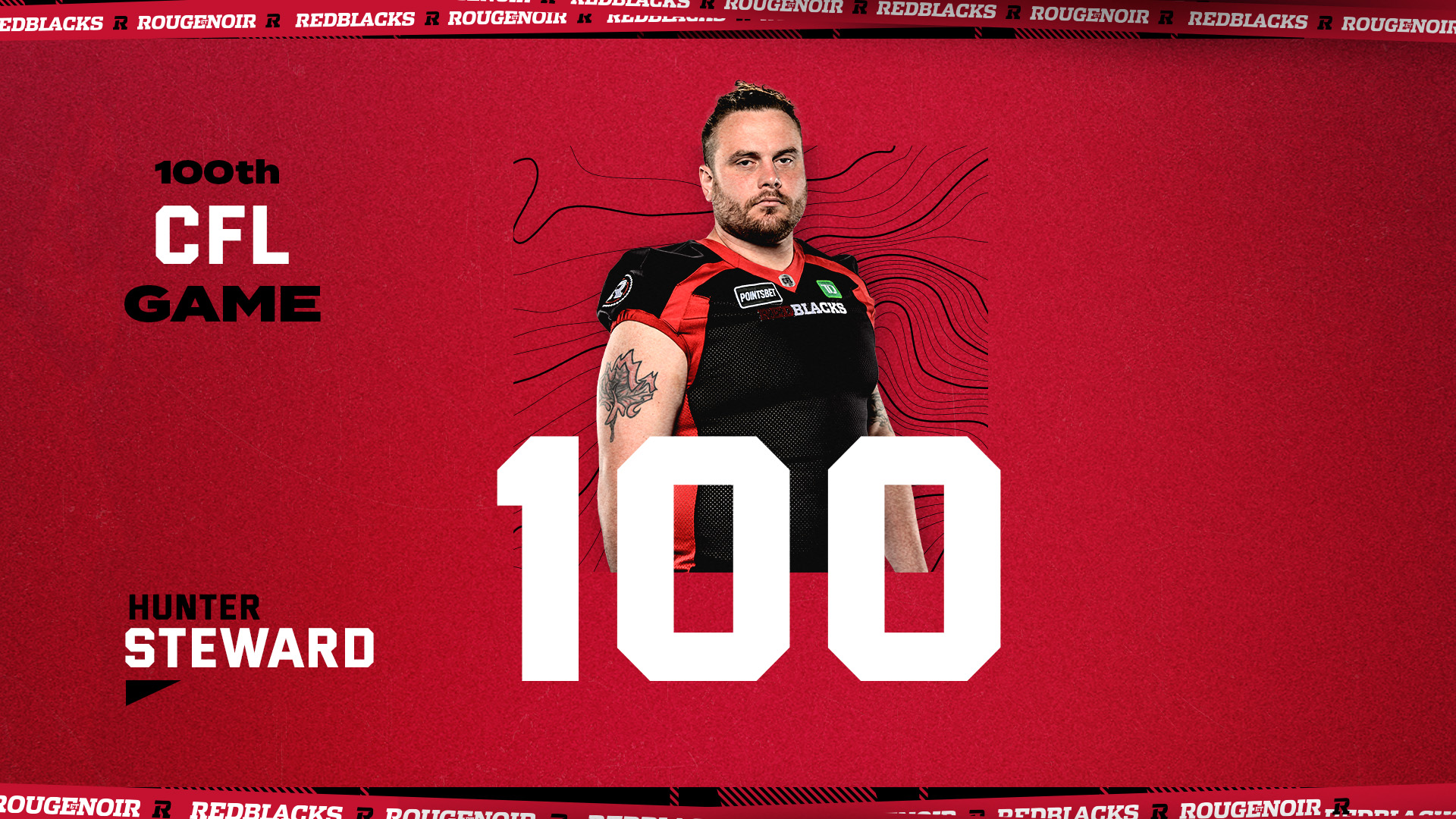 Hunter Steward has only been a REDBLACK for a short period of time, but he has long been a rock on the offensive line in the Canadian Football League. When the offence runs out on the field, Steward will go out with them, marking the 100th time he put on the pads, and hit the field to protect his pivot.

“It feels really good, to be honest,” Steward said. “It’s kind of hard to put into words, because there are a lot of memories that go into it. There have been a lot of seasons, a lot of friends, and a lot of teammates, coaches, and training staff. They have all been a big part of it. It’s pretty cool, and it’s really special.”

“It’s one of those milestones where you can just be proud of yourself. Football is a big team sport, especially on the offensive line. All five guys have to be working together all of the time.”

During his college career with the Liberty Flames in Virginia, Steward, a native of Calgary, Alberta, was drafted in the 2013 CFL Draft by the BC Lions with the sixth overall pick. He went back to college for one more season, before signing with the Lions ahead of the 2014 season. Steward spent the first two seasons in BC as a backup, playing just 10 games total, but in 2016, that changed, and he played in every single game for the Lions in the regular season.

For the next four seasons after 2016, Steward was a mainstay on the Lions’ offensive line, standing guard for some of the league’s better quarterbacks, including Travis Lulay, Michael Reilly, and in 2021, Nathan Rourke. Although he has never been named to an All-Star team, and has never been the recipient of an award in the league, Steward has earned himself the reputation of being one of the quality Canadian offensive linemen in the CFL.

“Those All-Stars mean nothing to me,” Steward said. “As long as I play well, and as long as the team does well, I’m happy. That’s all I care about. I pay no mind to it at all.”

At the age of 30, the Lions opted not to re-sign Steward during this past offseason, allowing him to sign anywhere when February rolled around. On February 8th, the Redblacks announced they had signed the veteran to a contract for the 2022 season, bringing him to the Nation’s capital.

Steward was one of the pieces brought to Ottawa by General Manager Shawn Burke, who completely revitalized the offensive line, and the offence as a whole, but it wasn’t his first time in Ottawa. Steward lived in Ottawa for about two years growing up, and signing in Ottawa felt like a dose of familiarity in an offseason filled with so many changes. Along with Ucambre Williams, Darius Ciraco, Jacob Ruby, and Dino Boyd, the REDBLACKS started the season with five new starters on the line. Quickly, they gelled together, forming a cohesive unit, and protecting the quarterback.

In 2022, the REDBLACKS rank fourth-best in sacks allowed, a stark contrast to the 2021 season, where Ottawa quarterbacks were sacked a league-high 53 times in just 14 games. Whether it has been Jeremiah Masoli, Caleb Evans, or now Nick Arbuckle, the offensive line has been strong, and at least part of the credit lays at the feet of Steward, who has been a rock at left guard in the first half of the season.

At the team level, Steward has been valuable. The personal achievement of 100 games played, however, shows more than that. Playing a sport where careers are notoriously short, and a position that is among the most physical in sports, 100 games played shows perseverance, resilience, and desire. There is no glamour on the offensive line, people don’t buy your jersey, and the only time you get noticed by the average fan is when you make a mistake, and yet, Steward takes the field every day, working to make himself, and his team better.

“Personally, I’m totally fine with that,” Steward said. “I’m not the flashy attention-seeker, I’m okay flying under the radar. It’s just going to work every day, doing what you get paid to do. It’s fun being around the team and the guys in the locker room. I’m on TV, but I don’t think I’m anything special or anything like that.”

When he next straps on the pads and takes the field, he will be playing his 100th game, but Steward’s book isn’t finished. There is still more to write, and more chapters to come.

“My goal was always to get 10 years, and the dream was always 15 years,” Steward said. “It’s looking like 10 is going to be achieved, so right now I’m transitioning to make the goal of 15 years. Maybe we can even get closer to 200 games, I don’t know. I think about it everyone once and a while, but you can’t get stuck up on that.”

If Steward’s 100th game does, in fact, come on Friday night in Montreal, it would be full circle for him. His first-ever CFL start came at Percival Moulson Stadium, and he says that would be a pretty cool experience.