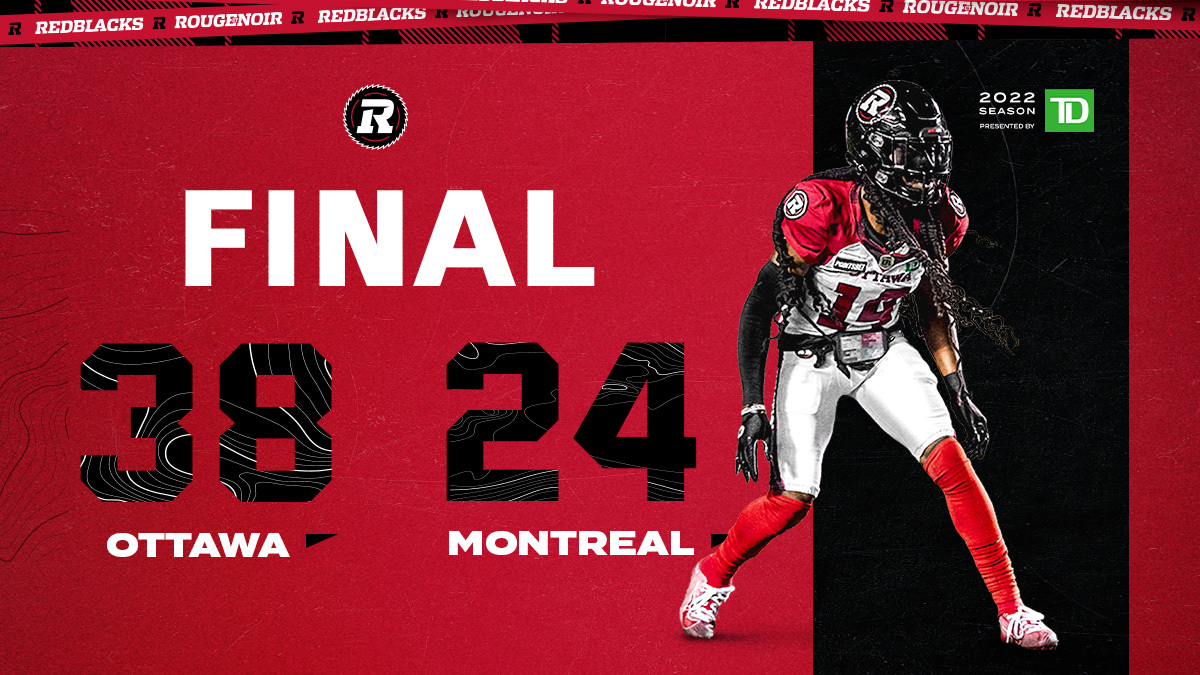 With their backs against the wall, the Ottawa REDBLACKS picked up a second straight road win, Saturday night, earning a statement 38-24 victory over the Montreal Alouettes, at Percival Molson Memorial Stadium.

The defence led the way, with two fumble recoveries — one returned for a touchdown by Davon Coleman — and a pair of interceptions, as the REDBLACKS dominated the turnover margin. Not to be outdone, Nick Arbuckle threw for 313 yards and a touchdown to Darvin Adams, and Caleb Evans ran in another. Jaelon Acklin posted a career-high 159 receiving yards.

It was the Ottawa defence striking first, with the league-leading ninth sack of the year for Lorenzo Mauldin IV taking the Alouettes offence off the field.

With the ball in hand, Arbuckle drove the REDBLACKS deep into Montreal territory, with completions to Ryan Davis, Jaelon Acklin, Anthony Gosselin, and Nate Behar, to say nothing of an 18-yard-run by the Ottawa pivot himself.

From the Als’ 12-yard line, the birthday boy Lewis Ward knocked through a 19-yard field goal, giving the REDBLACKS a 3-0 lead.

The Montreal rushing attack responded, however, creeping up on the Ottawa endzone on the ensuing drive, where kicker David Cote tied the game from 33 yards out. Soon after, they took a lead of their own, with Harris capping off a five-play drive with an eight-yard touchdown pass to Eugene Lewis. Cote’s extra point gave the Als a 10-3 lead.

Once again, though, the REDBLACKS defence seized control of the game. Near the midway point of the second quarter, with Montreal backed up against their endzone, Kene Onyeka came flying off the edge, and stripped Harris of the ball. Coleman scooped up the loose ball, and ran it seven yards across the goalline, for Ottawa’s first defensive major of the year.

Ward was perfect on the PAT, but Mike Benevides’ defenders weren’t done there. On the very next series, Abdul Kanneh picked Harris off for his first interception of the campaign, and punter Richie Leone was able to add a subsequent rouge, as the REDBLACKS retook the lead, 11-10.

They weren’t done there, but this time, it was the offence finally breaking through. Arbuckle connected with Jaelon Acklin for a 64-yard reception into Alouettes territory, and a quick reception by Devonte Williams positioned the REDBLACKS at the Montreal three-yard line.

Arbuckle rolled to his right, and found Adams in the back of the endzone for his first touchdown toss with the team, and Ward’s conversion gave the REDBLACKS an 18-10 advantage at the half.

In the second half, the REDBLACKS didn’t let up in the turnover battle. Just minutes into the third quarter, a Harris’ pass was intercepted by Ranthony Texada, leading to a Ward field goal that made this a 21-10 game.

A 44-yarded by Cote cut the Ottawa lead back down Cote eight, but a 55-yard receiving series by Acklin yielded another from Ward, giving the REDBLACKS a 24-13 cushion.

Cote was good again from 26 in the third quarter’s dying moments, and the REDBLACKS entered the final frame up 24-16.

Another rouge by Leone gave Ottawa a nine-point lead 37 seconds in, and another turnover returned the ball to the REDBLACKS on the suing drive. This time, it was Alonzo Addae forcing a Jeshrun Antwi fumble, recovered by Onyeka.

Arbuckle hit Adams downfield on a 31-yard fade route, and a 15-yarder from Ward extended the lead to 28-16.

Montreal got a rouge of their own late in the game, but Caleb Evans entered late, and ran the clock down before scoring a rushing touchdown, making it 35-17 in favour of the REDBLACKS.

A late penalty call put the Als in the redzone, where Harris found Jake Wieneke for a touchdown, but that would be all, as a final Ward field goal from 38 yards allowed the REDBLACKS to take their second straight, 38-24.

UP NEXT: The REDBLACKS return to TD Place on Saturday, September 10, for a 2:00pm matchup with the Toronto Argonauts.