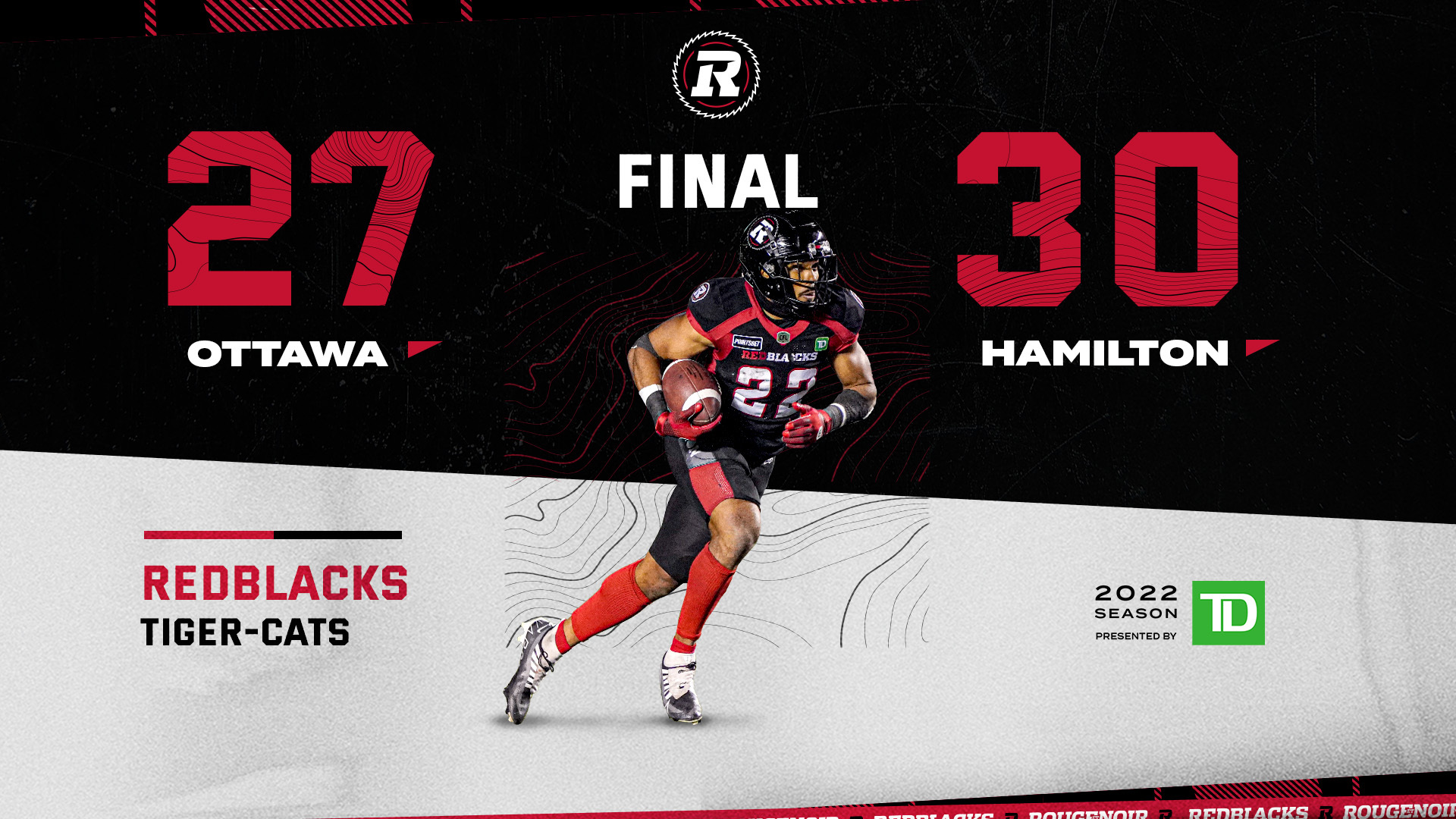 The Ottawa REDBLACKS officially fell out of playoff contention, Friday night, with the Hamilton Tiger-Cats kicking a last-second field goal to hand them a heartbreaking 30-27 defeat.

Despite the bitter pill to swallow, it wasn’t all negative for Ottawa, with Caleb Evans setting a CFL record for most rushing touchdowns in a season by a quarterback. The 24-year-old’s 15th rushing major of the season — the second of two on the night — moved him past the legendary Doug Flutie to secure the milestone.

With another rushing touchdown, Evans can also tie the franchise mark for single-season rushing scores by any player, set by Ron Stewart in 1960.

Nick Arbuckle threw for 166 yards, completing 70 percent of his passes, combined with the pair of touchdowns by Evans, and a sensational play by Brandin Dandridge, who stripped Steven Dunbar of the ball and returned it 52 yards for a defensive touchdown.

The REDBLACKS’ defence again started strong, with Lorenzo Mauldin stripping Dane Evans of the ball, and recovering it himself, for his league-leading 16th sack of the campaign.

Hamilton eventually broke the deadlock, with a 30-yard field goal by Seth Small, and a quarterback sneak touchdown by their own Evans gave the Ti-Cats a 10-0 lead at the end of the first quarter.

Caleb Evans returned fire less than three minutes into the second frame, with a sneak of his own, and Lewis Ward’s PAT cut the deficit to 10-7.

On the Ti-Cats’ next offensive play, Dandridge turned in his Play of the Year candidate, pulling the ball straight out of Dunbar’s hands, and running it back for his first CFL touchdown. Ward again converted on the point after and gave the REDBLACKS a 14-10 lead.

Evans’ record-breaking touchdown sneak with just under five minutes remaining in the quarter gave Ottawa 21 points, but a Small field goal before the half made it 21-13 REDBLACKS at the break.

Despite both offences putting plays together, Small logged the only points of the third quarter, with a 38-yard field goal, and the final quarter began with Ottawa holding a 21-16 advantage. The Ti-Cats were in scoring territory though, and Dane Evans snuck in another touchdown. They were successful on the two-point try, and took a 24-22 lead.

A Ward field goal from 36 yards out tied the game soon after, but Small countered from 27, again giving Hamilton a three-point lead.

With just 1:47 to play, the REDBLACKS drove down the field, and Ward made good on a 51-yard bomb, but Small kicked the winner from 30 with no time on the clock, and the REDBLACKS’ postseason hopes came to an end.

Up Next: Ottawa closes out the season at home, next Saturday, at 5:00 pm against these same Ti-Cats.