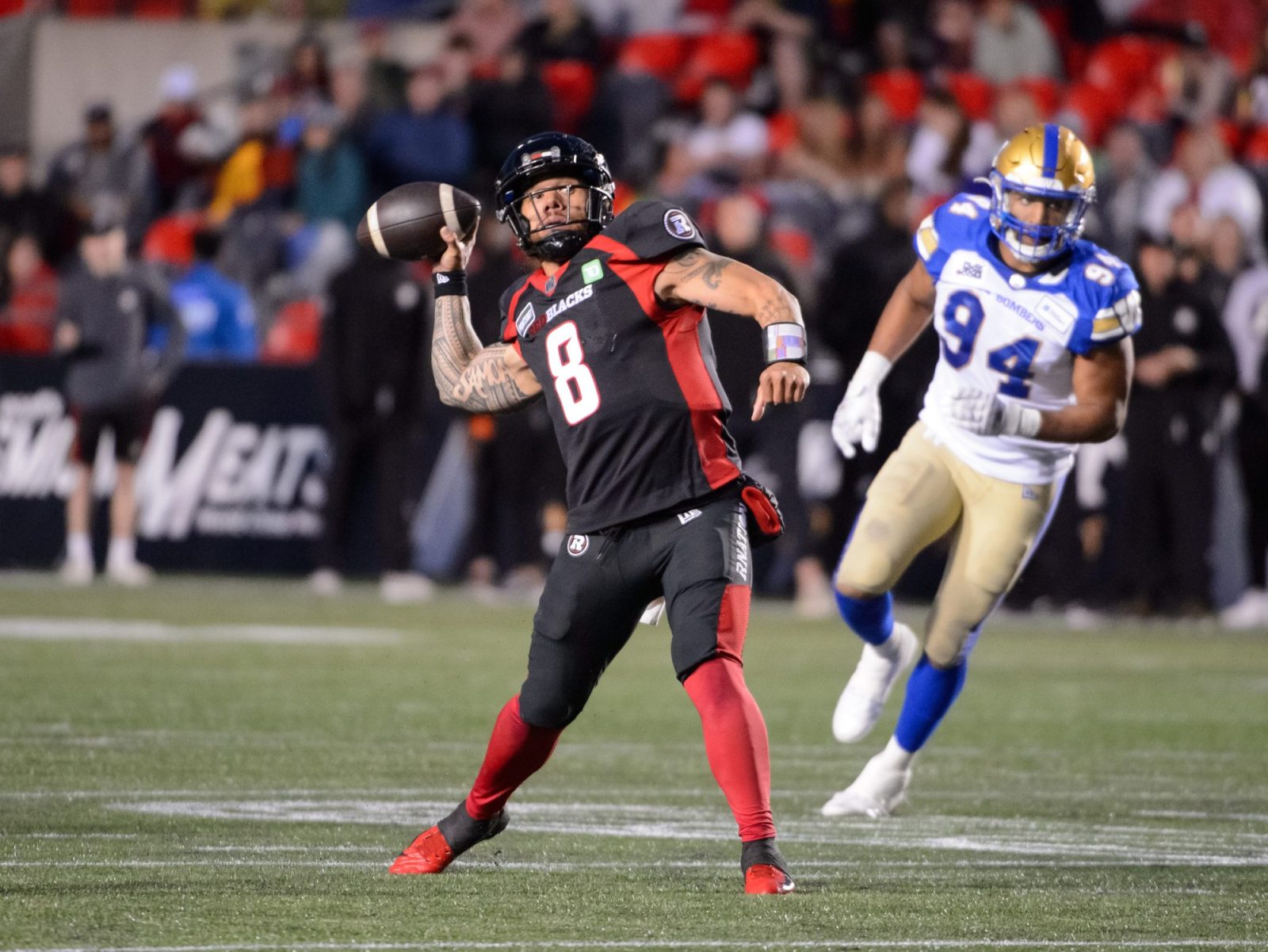 Week 5, the Ottawa REDBLACKS are coming off a trio of losses by one score or less and facing a white-hot Saskatchewan Roughriders team – who has won three of their first four games – proving the path to the win column won’t be easy.

The REDBLACKS’ new quarterback, Jeremiah Masoli, took to the field with his nearly brand-new offence, which still hadn’t been fully broken in. In one of the most hostile environments in the Canadian Football League, the wheels spun, and Ottawa fell to 0-4. But the score was only a piece of the story, as Masoli suffered a season-ending injury.

Masoli’s first season in the nation’s capital didn’t end the way he would have liked, completing 67 percent of his passes for 1,083 yards with two touchdowns, matched by a pair of interceptions. That hasn’t changed the opinions of Shawn Burke, the REDBLACKS General Manager, who wanted to ensure his quarterback’s future would come in the red and black.

“If you looked at where he was, he was well on pace for 5,000 yards passing through the first four games,” Burke reminded those who had forgotten. “Some of our struggles offensively came in the red zone, and that comes with knowing your personnel, and working together. I see that changing, and I’m excited to see Jeremiah roll with a lot of the same faces for a second year.”

One of the most important things for Burke this offseason has been building on the positives and ensuring he has a good foundation to build upon. He describes the quarterback as one of the key pieces, adding that in the CFL, you win “in the trenches, and with your quarterback.”

Masoli was already under contract for the upcoming season, but both parties felt that committing to one another for an extra season was well worth the paper used in the contract.

Those negotiations went well, according to Burke. He calls Masoli the “consummate pro,” adding that at no point was anything taken personally, and he wanted to ensure the future of the team around him, not just his own.

“He works toward improving the team,” Burke said. “You want to have people to surround you to be great, and if you demand too much, that can’t happen. Jeremiah understands that balance between the two.”

That leadership isn’t something new, it has become a trend. While healthy (and even after returning to the facilities on crutches), Masoli became one of the leaders on the team, as you would expect of your starting quarterback, especially when they bring experience as he does. On practice days, he was one of the first guys out of the room, and routinely stuck around long after the final whistle to run routes with his receivers.

It was the same case off the field, as Masoli was in the gym early, and left the facility late. That is the expectation of him for the front office, but it had a positive result on some of the young players, some of whom were still trying to figure out what it meant to be a professional football player.

“Jeremiah is the ultimate competitor who can set the standard for the team,” Burke said. “He’s the hardest-working player, and when guys see him in the facility at 5:30 in the morning, they are going to follow. That’s what he brings, he sets the expectations for what it takes to be a winner.”

Some things are easy to fake, and leadership isn’t one of them. It requires a genuine drive and passion for something, and in sports, that ‘something’ is pretty straightforward: a championship. Now 34, Masoli has never been able to cement his legacy with a Grey Cup, but the desire has never faltered. In eight seasons with the Hamilton Tiger-Cats, he never got a ring, and with last season ending as it did, there has only been fuel added to the fire in the San Francisco kid’s belly.

“He expects big things out of himself and the organization,” Burke said. “He has made a commitment to be up here in the community as early as I have ever seen him before the season, but that’s the commitment level he has to work with his receivers, and rehab.”

With the starter now taken care of, Burke and company are hoping to check all of the boxes. Ensuring a quality insurance policy is in place, even if just for peace of mind, is a priority.

“The situation in the league right now is to wait and see for some dominos to fall,” Burke said of the league’s quarterback carousel. “Both Nick Arbuckle and Caleb Evans are waiting to see what’s out there, which is their right in free agency. If it all works out, we want to have a backup with some CFL experience. We feel that’s important for our situation.”