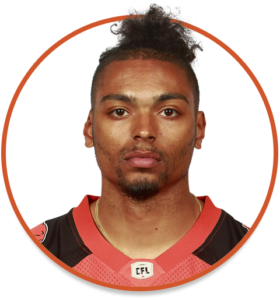 Acquired:
The BC Lions selected Nate in the fourth round (33rd overall) of the 2017 CFL Draft.

Highlights:
2018: For the first time in Nate’s young career, he appeared in all 18 regular season games. The Carleton grad served as a backup defensive back and recorded five special teams tackles for the Lions.

2017: Nate enjoyed an effective training camp and was placed on the practice roster heading into the regular season. He made his CFL debut on July 28 at Edmonton and notched his first special teams tackle. He also saw action on August 5 versus Saskatchewan before spending the remainder of the season on the practice roster.

Nate set a career-high for tackles during the 2014 season with 49 and his three interceptions in 2013 represent a career mark. Opposing quarterbacks stayed away from the ball-hawking defensive back during his final season with the Ravens, but he still managed to record 22 solo tackles and a pair of pass break-ups.

Personal:
During his time at Carleton, Nate majored in Communications and Media Studies. A hip-hop connoisseur, Nate lists Kanye West and J Cole as his favourite artists. Nate enjoys pillaging and plundering opposing quarterbacks’ poorly thrown passes, so it makes sense that his favourite film is The Pirates of the Caribbean. Nate is quick to credit his parents and girlfriend as his biggest fans. A self-proclaimed gym rat, Nate is never far from the weight room. Once he hangs up his cleats, Nate hopes to open his own business.