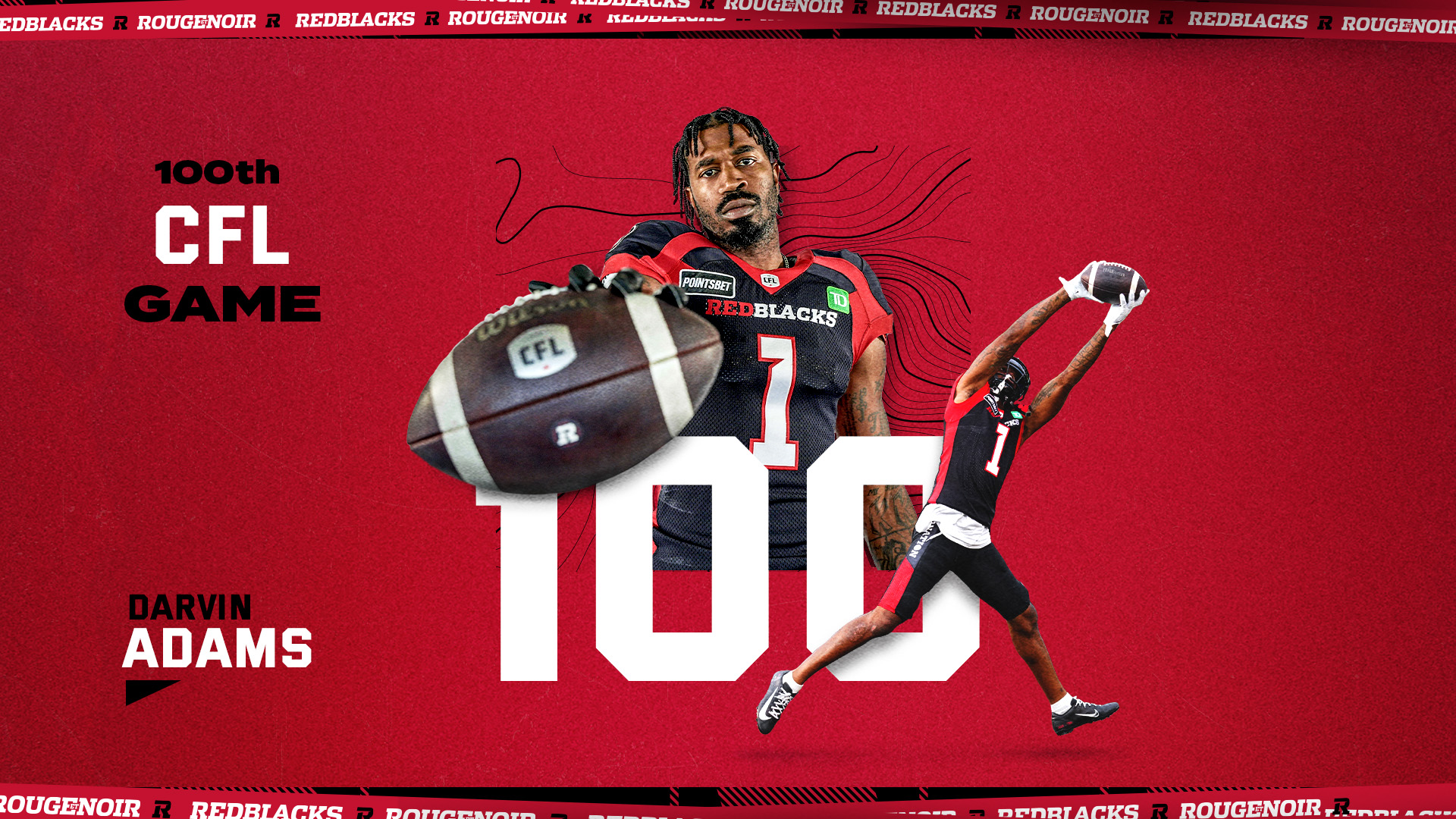 Ottawa REDBLACKS receiver Darvin Adams has seen it all through nearly 10 years in the Canadian Football League.

From the bottom of the standings, to securing the Grey Cup-clinching touchdown, the 32 year-old has experienced the high’s and low’s of a CFL season, moreso than most who come through the league. Having now played far longer than the average professional football career, Adams credits his longevity to staying in the moment, and taking things day-by-day.

It should come as no surprise, then, that the Canton, Missouri native had no clue he’d be appearing in his 100th career CFL game, Friday, when the REDBLACKS host the Edmonton Elks at TD Place.

“That goes to show you, I really don’t even worry about those types of things,” he said. “I try to keep my head down, and just keep going, just keep playing as long as I can.”

The focus on his play has yielded enviable results. Following a stint with the NFL’s Carolina Panthers in 2011, and UFL’s Virginia Destroyers in 2012, the Auburn product joined the Toronto Argonauts in 2013. Though appearing in just one game, Adams would suit up in 10 the following season, totalling 261 yards and two touchdowns on 21 catches, altogether.

In 2015, Adams signed with the Winnipeg Blue Bombers. Following two productive seasons, and his first postseason appearance, his career truly took off when now-REDBLACKS head coach Paul LaPolice joined the Bombers as offensive coordinator in 2017. Over the next two seasons, Adams posted back-to-back 1000+-yard campaigns (2,148 altogether), combined with a total of 17 touchdowns on 137 catches.

Despite injuries limiting his game action over the following two seasons, Adams helped the Bombers to two straight Grey Cup victories in 2019, and 2021, hauling in the overtime game-winning touchdown in the latest edition of the championship contest.

Knowing how quickly a CFL season can change, and what it takes to win, Adams remains confident in the REDBLACKS’ potential, despite a 1-7 record to start the season, amid the injury to star quarterback Jeremiah Masoli.

“I think we’ve got all the right pieces to turn this thing around,” said Adams. “We’ve got a lot of guys here that can play football, and once everybody gets on the same level as far as making plays at the right moments, I think it’s going to be a great outcome. Things are going to turn around here.”

Though it won’t be easy, Adams knows he is a player who can be a steadying influence on his teammates who may not have gone through the same rigours of a CFL season. For a man who points to approaching every year like his rookie year as a reason for his success, Adams also knows that experience goes a long way towards righting the ship.

The effort to do so starts Friday, with the Elks in town. While Edmonton lies ahead of Ottawa in the standings, they too have have endured their struggles over the past couple of seasons. Still, Adams and the REDBLACKS know they can’t afford to look past anyone at this point in the year, and it will take a collective effort to come away with a win at home.

“The mentality is the same: we just need to win. We all just know we need to win,” Adams said. “I feel like that’s all we need, just a complete game to get us rolling.”

Adams is solely focused on helping the REDBLACKS get that much-needed win, Friday, but knowing that he’ll be suiting up in Game #100, he’ll also take a moment to appreciate where this CFL journey has led him. Adams remains grateful for every opportunity to strap on the pads, but perhaps that will ring a little truer on Friday night.

“I’m just really thankful, because at any moment, this could be taken away, whether it’s your 100th game, or your first game,” he said. “I’m definitely going to take the time to be thankful, and I’m just going to make the best of it.”

Don’t mistake Adams for a player in the twilight of his career, however.

“This has been a long journey, but it’s also been a great one. I’ve learned a lot, and I’m happy to be in this position, but I want more. I’m trying to make it to 150. I’m just trying to play more.”

Kickoff between the REDBLACKS and Elks is set for 7:00pm, on Friday night at TD Place.