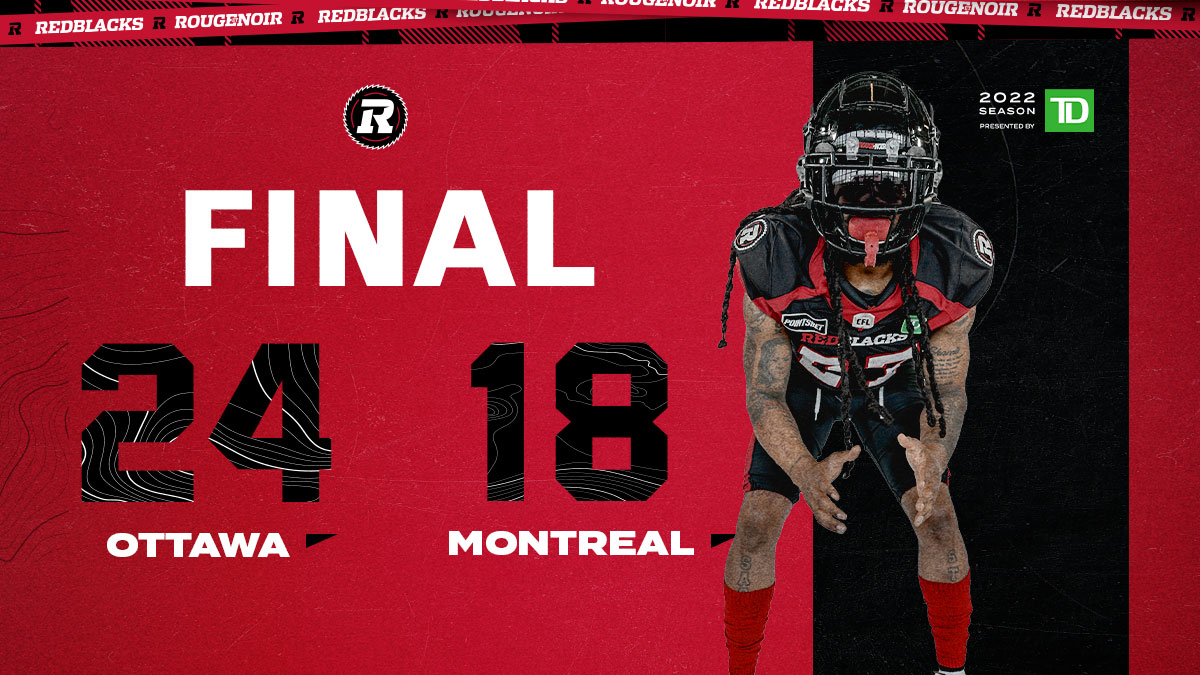 In his first game as a CFL head coach since November 8, 2015, Bob Dyce led the Ottawa REDBLACKS to a hard-fought 24-18 win over the Montreal Alouettes, Thanksgiving Monday.

“I’m really ecstatic for the players,” said Dyce. “They committed this week, and you could tell from the effort on the field that they were of one mind, and really worked together.”

The 56-year-old was quick to give credit to his staff, and particularly quarterbacks coach Will Arndt, who helped earn a win in his first game as a CFL play-caller.

“Will did a fantastic job, thrust into a difficult position. The whole staff gelled very well early, and I think their belief in each other, and the players’ belief in the scheme set them up for success.”

Nick Arbuckle completed 87.5% of his passes, going 28/32 for 229 yards, and setting up a pair of Caleb Evans rushing touchdowns, to go with a trio of Lewis Ward field goals. Defensively, Avery Williams forced a key fumble late in the game, that was recovered by Antoine Pruneau, and set up the eventual game-winning score.

The Als opened the scoring with a David Cote field goal with 2:53 remaining in the first quarter, but the REDBLACKS returned fire on the very next drive.

Arbuckle connected with Darvin Adams for a monster 40-yard reception to get Ottawa to the redzone. After a nine-yard run by DeVonte Dedmon, and five-yard catch by Jaelon Acklin, Evans snuck the first of his two touchdowns across the goalline. Lewis Ward was perfect on the PAT, and the REDBLACKS took a 7-3 lead.

Another Montreal field goal later in the second quarter made it a one-point game, before a Eugene Lewis touchdown grab gave the Als a 12-7 advantage. Trevor Harris couldn’t make good on the two-point conversion try, but another field goal from Cote with 23 seconds remaining in the half made it 15-7 in favour of Montreal.

The REDBLACKS started the third quarter with the ball, and catches by Acklin, and Justin Hardy drove them into scoring range. Ward was perfect on a 28-yard attempt, and Ottawa cut the deficit to five.

Ward converted another attempt, this time from 30 yards, with just over five minutes remaining in the quarter, and the Ottawa defence came through on the next Montreal possession. Williams forced a fumble by Harris, and Pruneau made the recovery, returning the ball to Arbuckle and the REDBLACKS offence.

The Ottawa pivot linked up with Hardy, Adams, and Dubois to drive 51 yards, and set up another sneak touchdown by Evans. Arbuckle returned to the field as the REDBLACKS lined up for a two-point conversion, and he found Hardy in the endzone to make it 21-15, Ottawa.

A Cote field goal made it close with 6:20 to play, but Ward answered with one of his own, as the clock read “1:29”. On the last possession of the game, Harris drove the Alouettes to the REDBLACKS 19-yard line, but Money Hunter broke up the final pass to Lewis, and the REDBLACKS held on for a 24-19 win.

It was not a win that came easy for the REDBLACKS, who dealt with multiple injuries throughout the game, with the likes of William Powell, Acklin, and Dedmon going down in the second half.

“You couldn’t draw up more adversity,” said Arbuckle, after his third victory as REDBLACKS pivot. “It required great communication, and we were able to figure it out and find a way to win.”

UP NEXT: These teams will face off again on Friday, this time at TD Place, in a 7:00pm ET kickoff.